OpenBSD 7.1 on the Olimex A20-OlinuXino-LIME2

The Olimex A20-OlinuXino-LIME2 is an older board with a 32-bits Allwinner A20 dual core Cortex-A7 processor running at 1 GHz and 1 Gb DDR3 RAM.

This board comes with a SATA connector, which was a distinctive feature at the time it was introduced.

It also has a HDMI connector, 1 Gb ethernet, and a LCD connector. 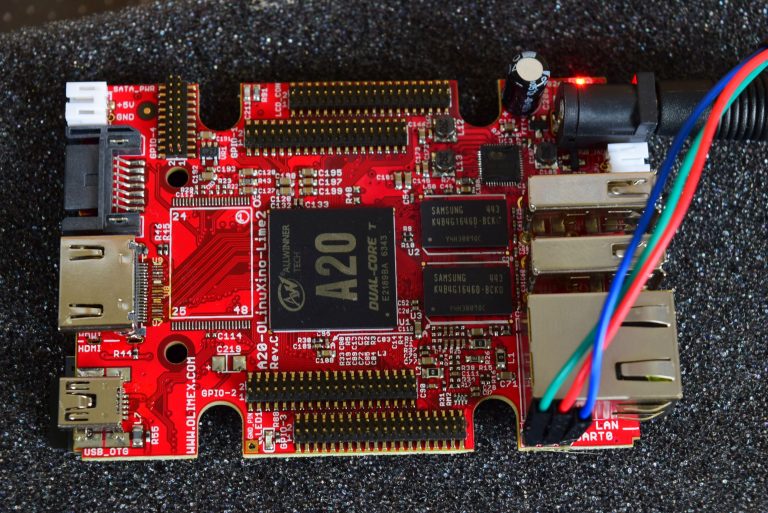 I used the miniroot image for the A20 cubieboard, miniroot-cubie-71.img and dd-ed to a micro-SD card. This image file is about 35 MB.

Because I first installed FreeBSD 13.1 on this board. I used the u-boot boatloader image from FeeBSD from the package u-boot-olinuxino-lime2-2022.04_1. This packages contains the file u-boot-sunxi-with-spl.bin:

With this micro-SD card in the slot, the Olimex A20-OlinuXino-LIME2 boots into the wonderful OpenBSD installer. As always with arm devices, OpenBSD can install a new system on the same card it boots the installer from.

The installer installs the sets over the network, so before installing you have to set up a local httpd server with the tgz files.

When the install is finished and the board has rebooted, edit the file /etc/installurl and point it to a mirror in your region.

After this you can start installing packages.

I run my $HOME in a memory file system, a.k.a. ramdisk.

I started to do this to prevent wear of the SD-card or other flash memory, and have learned to appreciate this kind of setup. On laptops and desktops it results in a clean $HOME after every reboot. It also helps my in my discipline to commit every important file and changes on them into my revision control system (I run a central Git server in my home network).

OpenBSD offers a brilliant mount option for memory file systems, this is the option -P/path/to/prototype. With this option. after creation the memory file system will be populated with the contents of /path/to/prototype, including any subdirs. q This is a great solution and I don't understand why other OS-es like FreeBSD or Linux don't offer it. q On this board I create a directory /proto and create a tree in this. I have this line in the /etc/fstab:

Adjust the size (here: 256000) to your needs and the hardware specifics. Move of copy the contents of your home directory to the proto directory (here: /proto/home/[username]) and reboot.

I run this system headless (no display and no keyboard attached, and use ssh to log in to it).

Like stated above, this board is powered by am Allwinner A20 dual core Cortex-A7 processor running at 1 GHz, and is fitted with 1 Gb DDR3 RAM.

There are of course a number of things you can do with this board, like running some TUI (text mode user interface) applications, like an IRC client like irssi or weechat, a text mode browser like lynx.