Ancient version of MicroEmacs upgraded with 30 years of hacks

MicroEMACS is based on the Conroy's version 30 of February 1986, distributed to USENET mod.sources. Since then it has undergone a fair number of bug fixes and performance improvements, and a few minor enhancements.

It is a lot smaller than other Micro Emacses, including those based on Conroy's November 1985 release.

Mark Alexander has done some fantastic work and added several features over the years, including support for etags, cscope, ispell, Rails, undo, UTF-8, regular expression search and replace, and extensions written in Ruby.

The current version can be found at https://gitlab.com/bloovis/micro-emacs and is available under the GPL open source license.

Some of the better known Micro Emacses are mg and Jove.

The main development is focussed on Linux, but it is easy to compile it on FreeBSD. This builds a non-debug version without Ruby support.

The build process creates a binary executable called "pe", which, according to the documentation, was chosen to avoid confusion with other versions of MicroEMACS, and could be read as "puny emacs".

This is on my FreeBSD box, after compiling as described above.

In comparison, mg on the same FreeBSD box is: 145K.

MicroEMACS doesn't come with a traditional man-page, but the git repository contains a very nice PDF that is extensive (36 pages). It states that it is intended as a reference manual for users already familiar with EMACS. But it offers enough information to get the novice user started.

Mark Alexander has done great work, and among other enhancements added support for spell check and for UTF-8 to MicroEMACS.

Below is an screenshot of MicroEMACS on my FreeBSD laptop with the UTF-8 demo file from the repository. 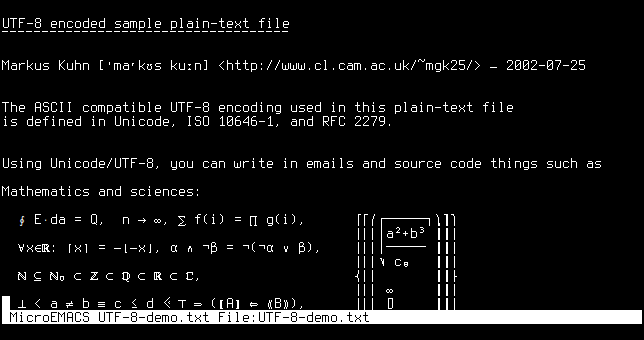 Below is an screenshot of MicroEMACS on my FreeBSD laptop with spell check in action. 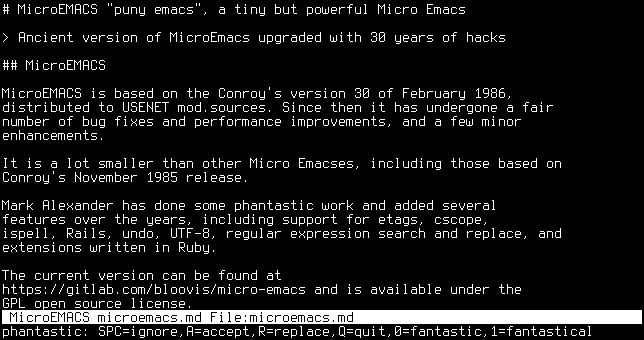 You need to have --besides aspell-- the aspell-ispell package installed to get this working.