Our project of the day is to build a new diskless system.

The goal is to have a setup on the PXE-server that will allow a diskless motherboard to run as a FreeBSD 10.0 server. The rootfs will be mounted over NFS. Also the diskless server mounts a iscsi virtual disk on which the jails are hosted.

Our diskless server will be running on an old VIA EPIA 600 MHz mini-ITX board. This means a low power processor and not that much RAM.

In the network there is a SAN that serves both NFS shares as well as iscsi drives. The root filesystem of our new diskless server will be mounted over NFS on this SAN. This makes it easy to access the rootfs from outside the server.

For our jails NFS is not a good choice because starting and running jails requires file locks. Because of this we choose to mount a iscsi drive which will hold our jails.

Administrating FreeBSD means practicing patience. We have to checkout the source code and build a new environment so several steps will take a lot of time. It helps to plan to do steps during the night...

Get FreeBSD 10.0 on a virtual machine

At the time of writing this page, FreeBSD 10.0-BETA4 was available. By using this beta we get all the new goodies FreeBSD 10 has to offer.

FreeBSD offers several possibilities to get it up and running, I downloaded the KVM qcow2 image and started from there.

This is how I started the virtual machine on my Debian kvm-server:

This virtual machine will be used to build the rootfs and the kernel for our new diskless server.

Next we get the latest source code to build FreeBSD 10.0. In the virtual machine we fetch this code with the new svnlite that is the replacement for cvsup.

Choose a mirror site close to you.

The checkout seems to take ages, so do this at the end of the day and continue with the following steps the next morning.

The VIA EPIA motherboard does not support that much RAM, so we will not use ZFS. I have not yet played with IPV6, so we first build without IPV6 support. After having set up /etc/src.conf we can start building the root filesystem.

Probably we could have disabled more parts of the build to create a smaller rootfs, but this way we have something to start with that can be optimized in a later phase.

Build kernel for diskless boot with rootfs over NFS

Next we have to build a kernel that allows diskless booting.

Create /usr/src/sys/i386/conf/MYKERNEL as a config file for the configuration of the kernel.

Go into the newly created environment, set password and create a new user, that can be used for ssh login.

The /conf/base/var and /conf/base/etc directories become read-write mounted as /var and /etc on a memory file system in our diskless system.

The conf/base/iscsi directory becomes read-write mounted as /iscsi on our diskless system. We need this to be able to mount an iscsi-drive on which we can install our jails.

On the PXE/DHCP server we now have to set up an entry for our diskless server. I use the isc-dhcp-server on a Debian-box. This is what is needed in /etc/dhcp/dhcpd.conf:

You have to change this according to your local situation.

Here is some explanation on the entry above:

After these preparations are done we can do a test boot of the system. Solve any problems before going to the next part.

Enter your fresh diskless system and have a look around. Notice that the root filesystem is mounted read-ony. This is done by the script inside /etc/rc.initdiskless, this is part of the standard FreeBSD environment. This is why we need the /conf/base directory on the NFS-server. The contents of this directory will be mounted in read-write mode on a memory filesystem.

Stop the diskless system. In the rootfilesystem we create a /etc/iscsi.conf file and run the tar command again to re-create the cpio format etc.cpio.gz file.
After that chroot again into the root filesystem and install ezjail.

Now the pkg repository catalogue will be initialised. Have a cup of tea, it might take a while.

The total amount of data on the ${NFSROOTDIR} for our diskless system will now be grown to about 520 Mb.

Go into the diskless system.

Use the created /etc/iscsi.conf file to connect to the iscsi-server and mount the iscsi-share on /iscsi on the diskless system.

On the virtual machine create a symlink in the NFS-share

This way when we create jails in the diskless server, these will be created on the iscsi-drive, which is the only rewritable partition on a harddisk.

After this, create a first jail to test

Make sure you have created an alias on your network interface. This can be done on the virtual machine in the rc.conf on the ${NFSROOTDIR}.

One of the quicks of FreeBSD jails is that for every jail that is created a file named /etc/fstab.<jailname> is created, where <jailname> is the name of the jail with periods replaced by underscores.

In our diskless system the /etc directory lives in a memory filesystem. This means any run-time changes are lost on shutdow of the system. I have not found a way to change this path. So we have to conserve these files on a writable harddisk.

What i do is copy the /etc/fstab.* files to /iscsi/jails/etc/ and after a reboot and a remount of /iscsi copy the files back to /etc. It is ugly, but it works...

To build this server I used a tons of info from the internet. Below are some very helpfull pages. 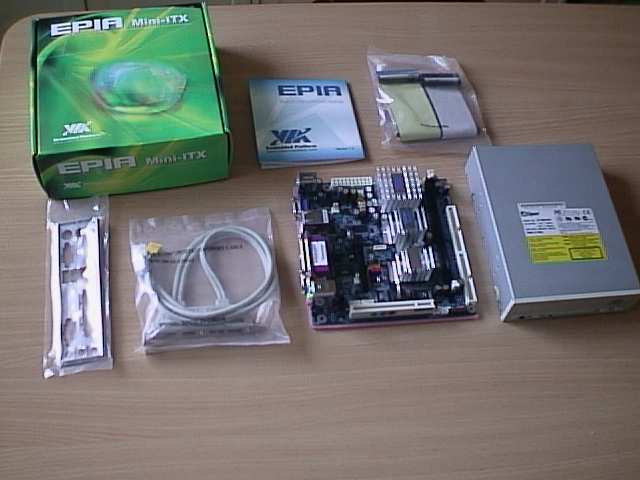 This Epia motherboard is our diskless FreeBSD10 jail server (next to a CD player, for size)